Experimentation is the key

In marketing and business intelligence, A/B testing is a term used for a randomized experiment to arrive at the optimal choice. Marketers today deal with several choices when it comes to running offers, discounts and even while writing marketing messaging such as email headlines and push notifications. So, instead of relying on intuition to select the best 'choice', using data to solve the problem of 'choices' can make things simpler and make a marketers' life easier. These 'Controlled marketing experiments' can help improve campaign success.

In the case of marketing automation platforms like MoEngage, experiments are customer campaigns (push notifications, emails) created on an underlying segment (a segment is a set of users exhibiting similar behavior). Target users for the campaign are chosen randomly from the 'segment' according to a percentage specified while creating a campaign. If the randomization procedure is correct, we can attribute any difference in outcomes (for example, conversion rate) between the two or multiple groups to the change we are testing without having to account for other sources of variation affecting users behavior.

Analyzing the results of the test has been the difficult part. Most of the marketers are stuck with drawing a business decision out of results provided by A/B testing tools.

Suppose you ran a test with two variations and you observe the following 'click-through rates':-

One cannot directly conclude that B is the winning variation. It is true that the underlying CTR is not known as we are trying to infer the CTR by carrying out the experiment over a sample. The performance difference we have observed might be merely due to chance rather than because of changes we are testing.

For example, it is entirely possible to obtain different heads/tails ratios between two good coins if we only conduct a limited number of throws. In the same manner, it is possible for us to see a change between the A & B even though in truth the underlying user behavior is the same.

To understand results of A/B Test we come across terms like “significance,” “p-value” and “confidence interval.” Many A/B testing tools take this classical significance testing approach. You create a null hypothesis that all variations are same and then by running the experiment you try and find evidence to reject the null hypothesis.

To overcome these shortcomings of classical significance testing we have adopted a Bayesian framework. Instead of concentrating on mathematics and proving scientific hypothesis a Bayesian setup can answer the direct questions to fasten the business decision. The analysis is easier to understand as well as to communicate to non-technical audiences. Let’s highlight some terminology that we will see in results.

In a Bayesian framework CTR/CVR is thought in terms of a probability distribution which represents our belief based on the sample size. In the above example, 'Variation B' has a CTR of 50% inferred over a sample size of 50. This is modeled using Beta distribution as shown below: The spread of the curve represents how precisely the experiment has measured the CTR. Peak at about 0.5 (50%) represent it is the most probable value and other values on both side have some chance of being true CTR. 95% Credible interval represents range in which CTR might fall with probability 0.95.

For Variation B this is calculated as (37, 63). More wider this interval more is the uncertainty. As sample size grows this spread squeezes. 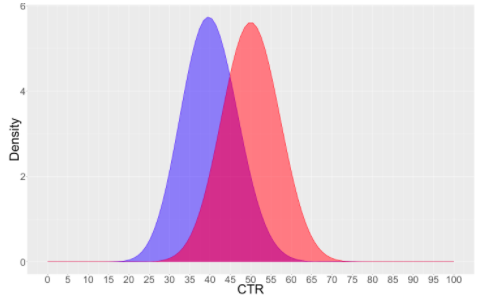 We can not assume that B is better. Means are quite separate apart, but there is some overlap between distributions. Credible interval above also highlights this overlap region. To quantify this uncertainty we calculate the probability of one variation beating another i.e. if you randomly draw a sample for Variation A and for Variation B, what are the chances that sample from B would have higher CTR than that of A.

Chance of beating all

Suppose we have more than 2 variation

Similar to 2 variates case we can calculate:- What this means for your campaigns

For campaigns with one variation and control

In campaigns where you have 1 variation along with Control Group, iff the chances of Variation 1 beating control exceeds 75%, it is established that your campaign communication is helpful in driving your primary conversion goal. We, hence, recommend you to remove Control Group and reach out to all users to maximize the campaign coverage and impact.

You can remove them from your running active campaigns by just editing them and setting Control Group percentage as zero. For single occurrence General Push, you can use this learning for future campaigns of similar nature.

You can see Chances to beat control in your Variation Performance table:

For campaigns with multiple variations

With multiple variations, iff the chances of any variation beating all others exceeds 75%, it is established that a particular variation is performing better than all the others. We, hence, recommend you to continue only with that variation so that you can maximize campaign impact by sending most effective message variation.

You can remove other variation from your running active campaigns by just editing and setting other variation percentage as zero. For single occurrence General Push, you can use this learning for future campaigns of similar nature. e.g. for below variation performance, we recommend you to continue with Variation 2 to maximize your campaign CTRs.

You might have a question that though Variation 1 has high CVR but we are still recommending to continue with Variation 3? It is because, we believe that a message copy contributes in increasing/decreasing your message CTR. Conversions are dependent on a lot many other factors as well. We hence consider a variation to be winning over other variations only if it has higher CTR.

Nalin Goel
Nalin Goel is the VP of Product of MoEngage Inc. He is an alumnus of IIM-Bangalore. He has over 6 years of experience in leading product development and strategy for global companies.
Subscribe to our newsletter
Stay updated on the latest in Omnichannel marketing